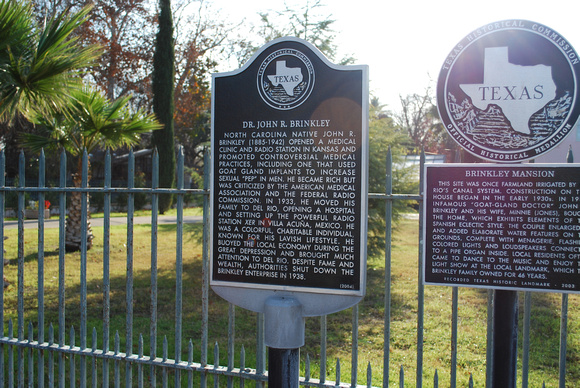 Text: North Carolina native John R. Brinkley (1885-1942) opened a medical clinic and radio station in Kansas and promoted controversial medical practices, including one that used goat gland implants to increase sexual "pep" in men. He became rich but was criticized by the American Medical Association and the Federal Radio Commission. In 1933, he moved his family to Del Rio, opening a hospital and setting up the powerful radio station XER in Villa Acuña, Mexico. He was a colorful, charitable individual, known for his lavish lifestyle. He buoyed the local economy during the Great Depression and brought much attention to Del Rio. Despite fame and wealth, authorities shut down the Brinkley enterprise in 1938.
Andrew Butler Photos
Powered by ZENFOLIO User Agreement
Cancel
Continue