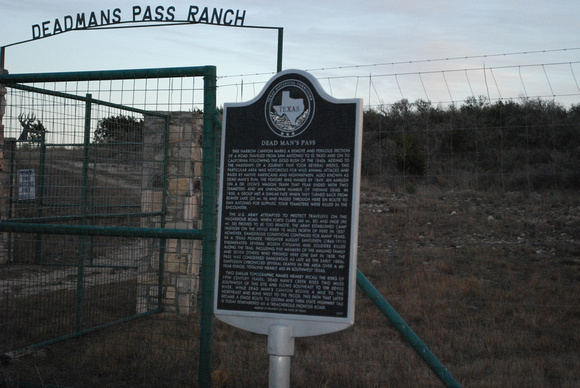 Text: This narrow canyon marks a remote and perilous section of a road traveled from San Antonio to El Paso and on to California following the Gold Rush of the 1840s. Adding to the hardships of a journey that took several weeks, this particular area was notorious for wild animal attacks and raids by Native Americans and highwaymen. Also known as Dead Man's Run, the feature was named by 1849; an ambush on a Dr. Lyon's wagon train that year ended with two teamsters and an unknown number of Indians dead. In 1850, a group met a similar fate when they turned back from Beaver Lake (25 mi. N) and passed through here en route to San Antonio for supplies. Four teamsters were killed in the encounter. The U.S. Army attempted to protect travelers on the hazardous road. When forts Clark (60 mi. SE) and Inge (90 mi. SE) proved to be too remote, the army established Camp Hudson on the Devils River 10 miles north of here in 1857. However, dangerous conditions continued for many years. In A Texas Pioneer, freighter August Santleben (1845-1911) enumerated several dozen civilians and soldiers killed along the trail, including five members of the Amlung family and seven others who perished here one day in 1858. The pass was considered dangerous as late as the early 1880s. Santleben chronicled several deaths in the area over a 40-year period, totaling nearly 400 in southwest Texas. Two similar topographic names nearby recall the risks of 19th century travel. Dead Man's Creek rises two miles southwest of this site and flows southeast to the Devils River, while Dead Man's Canyon begins a mile to the northeast and runs west to the Pecos. This path that later became a stage route to Ozona and then State Highway 163 is today remembered as a treacherous frontier road.
Andrew Butler Photos
Powered by ZENFOLIO User Agreement
Cancel
Continue