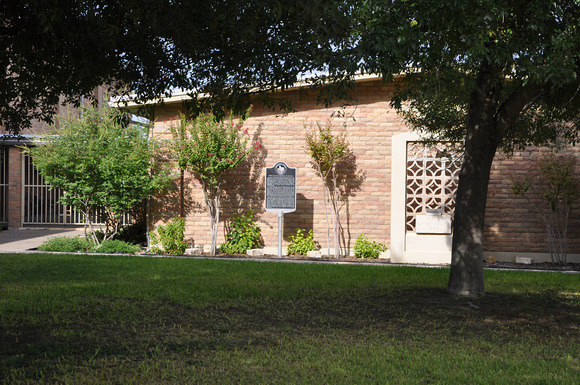 Text: On May 24, 1896, Pastor Frank Marrs joined the Rev. and Mrs. Edwin S. Stucker as founding members of Del Rio's First Baptist Church. Marrs was from the Southern Baptist Theological Seminary of Kentucky, and the Stuckers were both missionaries. The couple served railroad workers and their families from a railway car named "Goodwill," sponsored by the American Baptist Sunday School Society of Philadelphia, Pa. The church formally organized with six charter members. As Del Rio grew, so did the congregation and the need for a larger structure. Through a land donation, members moved church services to an adobe building on the southwest corner of Garfield and Pecan streets. On February 17, 1925, they laid the cornerstone of a brick and stone building at that same location to replace the adobe structure. That sanctuary remained home to the First Baptist congregation for 35 years. In 1960, the growing church built a new structure on Avenue G, outside the downtown area, incorporating the cornerstone of the old building. Over the years, Del Rio's First Baptist Church has constructed additional buildings to use for classrooms. It has also acquired land throughout the region to build other churches, including what would become the congregations of El Buen Pastor and Northside Baptist. Despite a fire that destroyed early church records, First Baptist Church has a strong sense of its history and remains true to the vision of service set forth by the founders. It continues to be an important institution in the Del Rio community more than a century after its modest beginning.
Andrew Butler Photos
Powered by ZENFOLIO User Agreement
Cancel
Continue