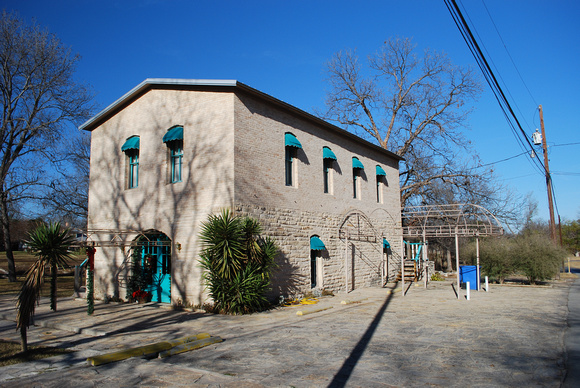 Text: Italian Stonemason G.B. Cassinelli and his partner John Taini were recruited in their native county by an American contractor who wanted them to construct buildings in New York. Shortly after their arrival in the United States, the project failed and they went to work for the railroads. Later, they were hired by the Federal Government to construct several stone buildings at Fort Clark in Brackettville. When that project was completed, they came to Del Rio to work on the Val Verde County Courthouse. Cassinelli became a successful area businessman. He owned a general store, a contracting firm, and sold wood, hay, lime, and brick. In 1903 he purchased land at this site for the construction of a cotton gin housed Cassinelli's short-lived gin operation and the upper floor was used for community dances and receptions. Located near a Ford of the San Felipe Creek and downstream from an ice house and dam, built by Cassinelli, the gin house was a popular site for many early Del Rio Social Functions. Interior alterations made in the early 1950s for residential purposes were later destroyed by fire.
Andrew Butler Photos
Powered by ZENFOLIO User Agreement
Cancel
Continue