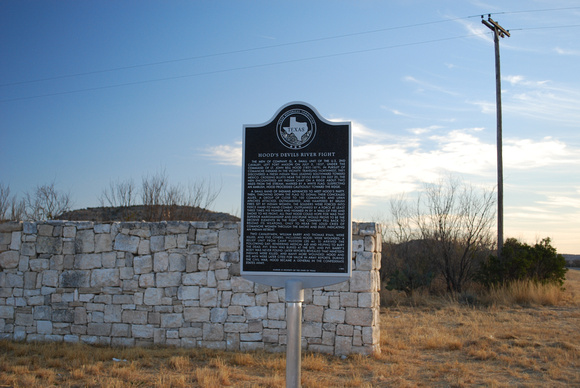 Text: The men of Company G, a small unit of the U. S. 2nd cavalry, left Fort Mason on July 5, 1857, under the command of Lt. John Bell Hood (1831-1879), in pursuit of Comanche Indians in the vicinity. Traveling northwest, they discovered a fresh Indian trail leading southward toward Mexico. Crossing bluffs near the Devil's River on July 20, the men encountered an Indian camp on a ridge about two miles from the steam, marked by a white flag. Suspecting an ambush, Hood proceeded cautiously toward the ridge. A small band of Indians advanced to meet Hood's party. Then, throwing down the flag to signal their concealed allies, the Indians attacked. Outnumbered, and hampered by brush fires set by Indian women, the soldiers were forced into fierce hand-to-hand combat. They heard the loud cries of Comanche women through the smoke and dust, indicating an Indian retreat. Two cavalrymen, William Barry and Thomas Ryan, were killed, and five others, including Hood, were wounded. Later reports revealed that nineteen Indians were killed, and many more wounded. Hood and his men were later cited for valor in army reports.
Andrew Butler Photos
Powered by ZENFOLIO User Agreement
Cancel
Continue