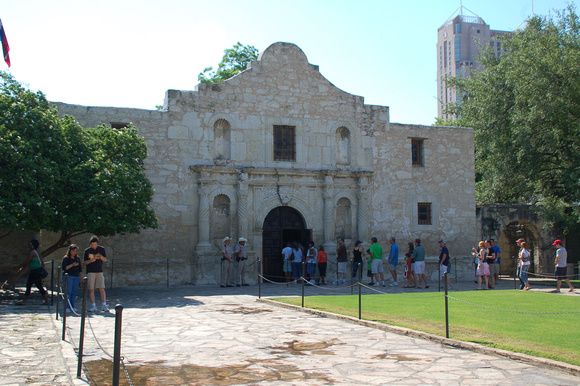 Text: Mission San Antonio de Valero, established nearby in 1718, was relocated here in 1724. By 1762, the Mission Plaza was enclosed by thick stone and adobe walls. The 11 x 14-foot main gateway was located at this site along the south wall. In 1803 Spanish cavalry from San Carlos de Parras del Alamo, Mexico, occupied the secularized mission and built one-story (low) barracks inside the south wall on each side of the main gateway. The Alamo, as the complex came to be known, was occupied in 1835 by Mexican soldiers led by Gen. Cos. They fortified the main gateway with artillery pieces and a defensive lunette, a semi-circular enclosure with deep trenches. In December 1835, Texas patriots captured the Alamo, but by Feb. 23, 1836, were under siege by an armed force led by Gen. Santa Anna. Couriers departed the Alamo through the main gateway during the siege. On March 6 Mexican troops breached the main gateway and retook the Alamo. After the assault, some Mexican military observers and local residents stated that Col. James Bowie and others died in the low barracks. The low barracks and main gateway were leveled in 1871, melding Valero Plaza on the south with the Alamo's plaza to create an open space.
Andrew Butler Photos
Powered by ZENFOLIO User Agreement
Cancel
Continue