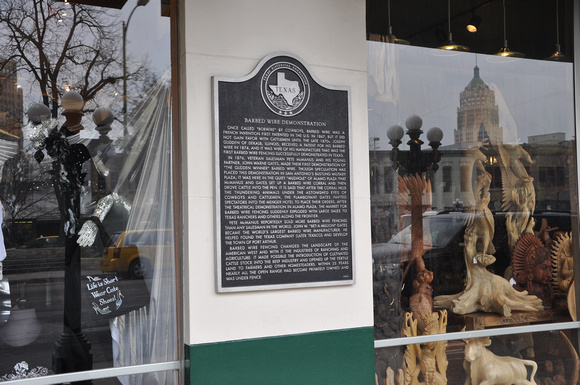 Text: Once called "bobwire" by cowboys, barbed wire was a French invention first patented in the U.S. in 1867, but it did not gain favor with cattlemen until the late 1870s. Joseph Glidden of Dekalb, Illinois, Received a patent for his barbed wire in 1874, and it was wire of his manufacture that was the first barbed wire fencing successfully demonstrated in Texas. In 1876, veteran salesman Pete McManus and his young partner, John Warne Gates, made their first demonstration of "the Glidden winner" barbed wire. Though speculation has placed this demonstration in San Antonio's bustling Military Plaza, it was here in the quiet "mudhole" of Alamo Plaza that McManus and Gates set up a barbed wire corral and then drove cattle into the pen. It is said that after the corral held the thundering animals under the astonished eyes of cowboys and cattlemen, the flamboyant Gates invited spectators into the Menger Hotel to place their orders. After the theatrical demonstration in Alamo Plaza, the market for barbed wire fencing suddenly exploded with large sales to Texas ranchers and others along the frontier. Pete McManus reportedly sold more barbed wire fencing than any salesman in the world. John W. "Bet-A-Million" Gates became the world's largest barbed wire manufacturer. He helped found the Texas Company (later Texaco) and developed the town of Port Arthur. Barbed wire fencing changed the landscape of the American west and with it the industries of ranching and agriculture. It made possible the introduction of cultivated cattle stock into the beef industry and opened up the fertile land to farmers and other homesteaders. Within 25 years nearly all the open range had become privately owned and was under fence.
Andrew Butler Photos
Powered by ZENFOLIO User Agreement
Cancel
Continue