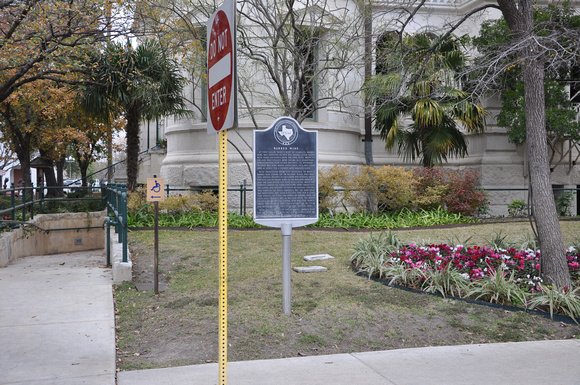 Text: At first called "Devil's Rope" by cowboys, barbed wire was patented in 1873 but found little favor with Texas cattlemen until the late 1870s, when its use and practicality were shown in a sensational demonstration here in San Antonio. Its showman-sponsor was John Ware Gates (1855-1911), who came here as agent for a pioneer wire manufacturer. With permission from city officials, he built a barbed wire corral on the Military Plaza, then went into various resorts of cattlemen and boasted of its strength and economy. Some of the ranchers made bets that the wire would not hold wild cattle. While the scoffers looked on, some longhorns where turned into the corral and prodded to frenzy by burning torches. They charged the fence furiously, but the wire held. The experiment was such a success that for a long time orders exceeded the supply of barbed wire. In later life known as "bet-a-million" Gates, the agent founded or organized several wire and steel plants. About 1901 he also invested in Spindletop oil field and helped develop the city of Port Arthur, Texas. With its sister utility, the windmill, barbed wire led to upgrading of beef cattle and enhancement of nutrition and the quality of human life.
Andrew Butler Photos
Powered by ZENFOLIO User Agreement
Cancel
Continue