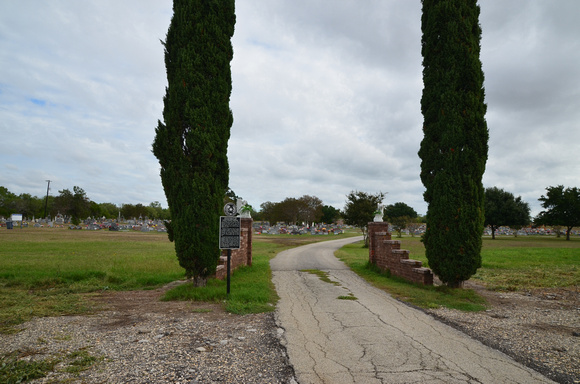 Text: In December 1854, Polish settlers began arriving in eastern Bexar County from their homeland in Upper Silesia. The early community of fewer than 20 families was called Martinez. In 1857, residents built a mission log church on the land of Ludwig Zaiontz (0.4 mi. W). Adjacent to the church, which was served by traveling priests, the local settlers established a cemetery. The first known burial was that of the Rev. Julian Przysiecki in November 1863. Przysiecki's death, the result of a fall from his horse, left the church without a Polish-speaking priest for some time. In 1868, the community built a new church dedicated to the Virgin Mary. In 1872, church members chartered a new cemetery at this site, reinterring burials from the original site. Residents changed the settlement's name to St. Hedwig in honor of Silesia's patron saint. Today, gravestones indicate the ethnic heritage of the community, which has included residents of Polish descent as well as those with German, Hispanic, Irish, Alsatian and other surnames.
Andrew Butler Photos
Powered by ZENFOLIO User Agreement
Cancel
Continue