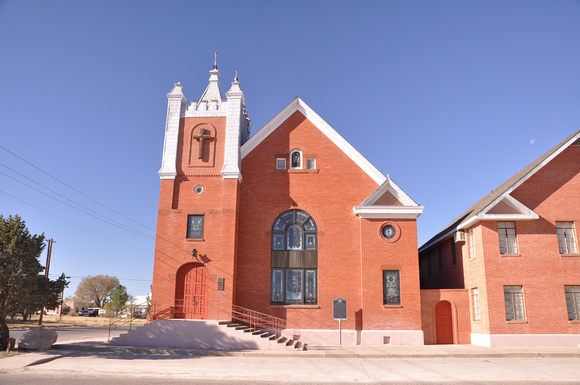 Text: This congregation grew out of a community Sunday School begun by Mrs. Peyton Parker in the Parker Hotel in 1881. One participant, pharmacist B. P. Van Horn (1852-1932), arranged a revival in 1891 that resulted in formation of the First Christian Church, the first church to be organized in Pecos. Van Horn acted as lay leader since there was no minister. When he left in 1895, the church disbanded until Mrs. Ed Vickers (1870-1950) and Mrs. R. D. Gage started a Ladies Aid Society in 1898. The society planned another revival which reactivated the fellowship. In 1899 lawyer R. D. Gage donated land for construction of a small sanctuary. One new member who joined the congregation during this period was Dr. Jim Camp (1870-1964), who served Pecos as a physician for over 60 years. In 1905 the Rev. Homer Magee (1882-1921) became full-time pastor. That same year, the church building was moved to this site. Plans for the present structure were made in 1908, after a revival led by the Rev. J. L. Haddock. In 1909 contractor E. B. Kisser completed this edifice, the oldest brick church building in Pecos. Educational facilities were added during pastorates of the Rev. Dr. Oliver Harrison, 1936-41, and the Rev. Earl Bissex, 1952, Recent remodeling was completed in 1974, under the leadership of the Rev. Clark Ford.
Andrew Butler Photos
Powered by ZENFOLIO User Agreement
Cancel
Continue