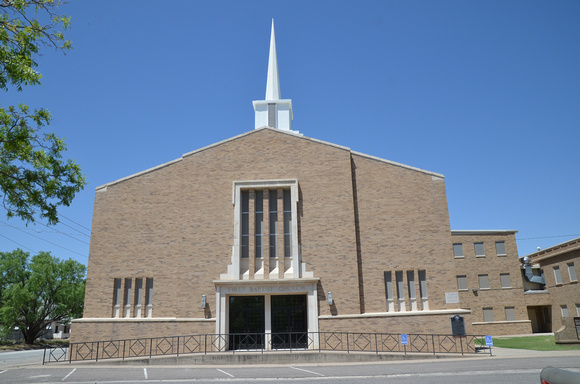 Pecos
Reeves County, Texas
31 25.366' N 103 29.850' W
Directions: Start at the intersection of 5th Street and Hickory Street. The church is on the northwest corner of the intersection.

Text: The Rev. Sumner Battle Callaway (1852-1952) led the organization of this Baptist church in 1885 and served as its first pastor. Callaway had come to Texas from Georgia and had been Gov. Richard Hubbard's private secretary and a lawyer before entering the ministry. The eight charter members included Callaway, A. M. and Sallie Harris Walthall, and Mrs. Colvin. The congregation's first church building was completed in 1887. A larger sanctuary was built in 1910, during the pastorate of the Rev. J. B. Cole (1858-1947). The First Baptist Church of Pecos City was a member of the Sweetwater Baptist Association from 1886 until 1902, when the El Paso association was organized here. It later became part of the Pecos Valley association. Over the years, the fellowship has been served by a number of prominent pastors, including the Rev. L. R. Millican who preached on the west Texas frontier for more than 50 years. The First Baptist Church of Pecos City has been active in home and foreign missionary work and has placed a great emphasis on community service.
Andrew Butler Photos
Powered by ZENFOLIO User Agreement
Cancel
Continue