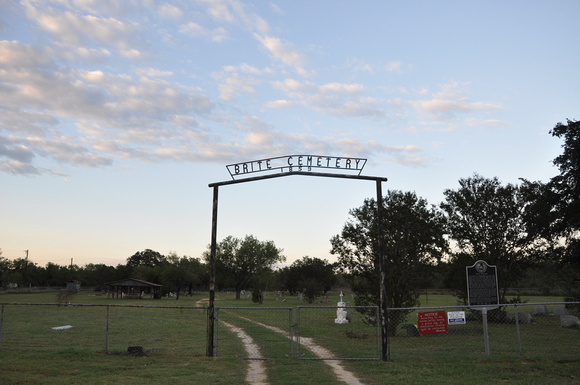 
Historical Marker: Brite Cemetery has served citizens of Atascosa County since the 1850s. It was formally set aside when Thomas Ransdele Brite passed away in 1859, though the earliest marked burial is that of his infant son, Dan (d. 1854). Thomas Brite was born in 1824 and came to Texas with his parents, Henry and Elizabeth (Moore), in 1839. He joined the Republic of Texas Army in the 1840s and participated in the Vasquez Campaign, Woll Campaign and Somervell Expedition, where he was one of the Texans who returned home as ordered by Sam Houston, rather than continuing into Mexico. Brite also fought in the Mexican-American War. He would become Atascosa County's first tax assessor-collector and later serve as county treasurer. After Thomas Brite's death, the land was left to his wife, Mary Louisa Fuller, and their two living sons, William and Charles. By 1876, The Brite family sold their land to Robert E. Neill, a Texas Ranger and veteran of the Mexican-American War who would be buried in the cemetery upon his death in 1878. Another notable burial is that of Alfred Kelso, Sr. (d. 1898), a veteran of the Battle of San Jacinto and sheriff of Gonzales County in the later 1830s and early 1840s. Also buried here are a number of other war veterans. At one time, the Neill Cemetery Association cared for the burial ground, but in 1955 the Brite Cemetery Association organized to care for the site. Today, Brite Cemetery still serves nearby communities as an important historical reminder of pioneer settlers of Atascosa County.
Andrew Butler Photos
Powered by ZENFOLIO User Agreement
Cancel
Continue