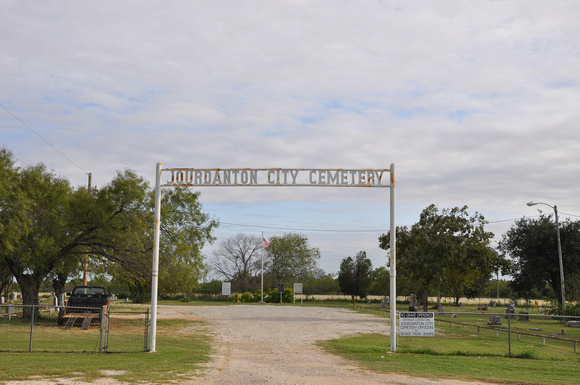 Historical Marker: T. H. Zanderson and city namesake Jourdan Campbell bought the 40,000-acre Toby Ranch in 1907 and laid out the town of Jourdanton. The original plat included two blocks designated for use as a cemetery. The Artesian Belt Railroad built through the site and the town grew quickly, with a lumberyard, cotton gin, grocery stores, bank, restaurants, hotels, churches and a school among the early establishments. The railroad improved shipping of livestock and produce to San Antonio and other points. In 1910, citizens voted to move the Atascosa County seat from Pleasanton to Jourdanton. The Jourdanton City Cemetery was originally used by all denominations; Lutheran and Catholic cemeteries were later established in other locations. The earliest marked graves here are those of Roland Purgason, an infant who died in 1910, and William P. White, who died in 1911. The Jourdanton City Cemetery Association organized in 1918, with John Moore as first president. The association added acreage to the cemetery in the 1950s, enlarging the graveyard to more than three city blocks. About one hundred veterans buried here have been identified, at least seven having served during the Civil War. Notable burials and gravestones include members of fraternal organizations and several law enforcement personnel, including four sheriffs and one deputy who was killed in the line of duty. Grave markers vary from simple wooden crosses to curbed family plots. The Jourdanton City Cemetery shows the cultural and economic diversity of this South Texas town, built rapidly because of the railroad and attracting people of varied ethnic backgrounds who made the site their home.
Andrew Butler Photos
Powered by ZENFOLIO User Agreement
Cancel
Continue