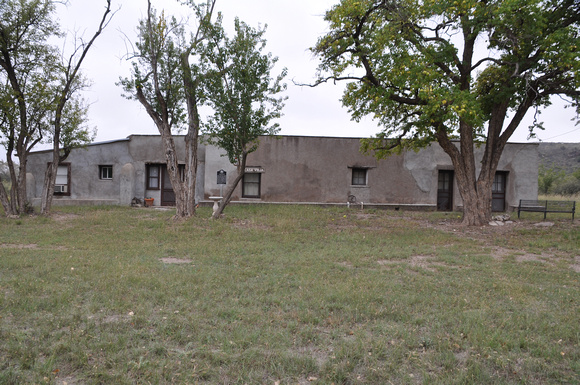 Text: In 1873, Archie Smith, a former Buffalo Soldier in the 24th U.S. Infantry at Fort Davis, built a home on 160 acres near the base of Dolores Mountain using local materials. Native oak beams support the near-rectangular one-story adobe. A large room with a vaulted ceiling was a private chapel for Smith's wife. It was also open to other denominations and Catholic masses before St. Joseph was built. In 1911, Emmett H. Carlton bought the property and built a new home, using the Smith house as a barn and stabilizing its walls with a lime plaster. Don and Vida Carlton occupied the house after restoring it in the early 1970s. The house is notable as the oldest home still in use as a residence in Fort Davis.
Andrew Butler Photos
Powered by ZENFOLIO User Agreement
Cancel
Continue