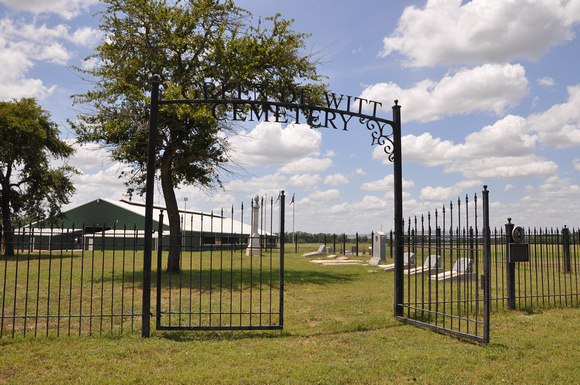 Historical Marker: Green Dewitt Cemetery Green (1787-1835) and Sarah (Seely) (1789-1854) Dewitt moved their family from Missouri to Texas in 1826 after he successfully petitioned the Mexican government for an Empresario Grant to settle 400 Anglo-Americans on lands southwest of Stephen F. Austin's colony. In 1831, Sarah received a separate grant, the Sarah Seely League, from which this acre was set aside for a family cemetery. The grave of Sarah, known for her "come and take it" flag as the fight for Texas Independence began, stands near a memorial for her husband, who is laid to rest in Mexico. The first known burial here is their grandson, Jonas Dewitt (1850-1851).
Andrew Butler Photos
Powered by ZENFOLIO User Agreement
Cancel
Continue