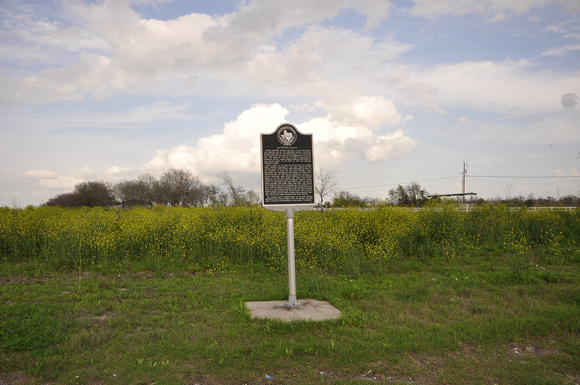 
Text: Altwein Family Johann Gotthülf Altwein (1801-1853), a grain mill builder and operator, and his wife Wilhelmine (Quandt) (1802-1880) brought their family to Texas from Prussia in 1851 and settled on a farm on the west bank of the Guadalupe River near this site. They donated land for the first Schumannsville community school. Named Altwein School in their honor, it was moved closer to the town in 1879 and renamed Unionwein School. Located about one-half mile east of this site is the Altwein family cemetery, established in 1853 upon Johann Gotthülf Altwein's death. Three months after purchasing the farm, he was working to clear the land and suffered a fatal heatstroke. Only one grave in the cemetery is marked with a headstone - that of two-year-old grandson, Herrman R. Altwein (1880-1882). Family history records at least fourteen burials at the site, some marked with simple native rocks. Interments also include those of Herrman's parents, Wilhelm (1840-1915) and Louise Staats (1847-1888) Altwein, and two of their daughters, one named Otillia (1884-1886). Also believed to be buried in the family graveyard are two children of a local Mexican laborer; the Altweins' oldest daughter Augusta (1830-1901), her husband Johannes Krams and their daughters Augusta Krams Dammann and Matilda Krams, who all died in 1883. Text: Another daughter, Bertha Matilda Krams Scheffell (1861-1933), was the last person interred in the family cemetery. The Altwein family is representative of the many German immigrants who came to Texas in the 19th century, and their legacy continues with descendants still living in the region.
Andrew Butler Photos
Powered by ZENFOLIO User Agreement
Cancel
Continue