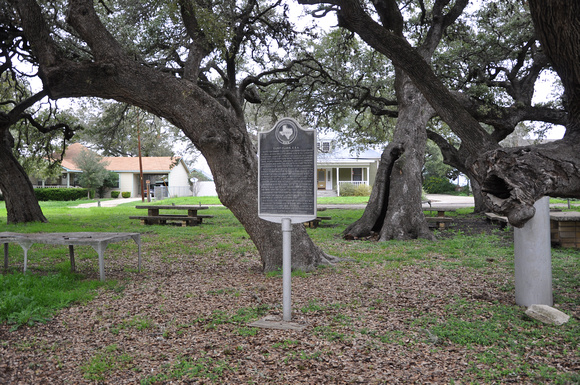 Text: Named for Edward Clark, first Confederate Governor of Texas, whose Executive Order June 8, 1861, created voluntary camps of instruction such as this. Food, camp facilities and guns were voluntary gifts by local people. Farmers, merchants, artisans, laborers gave goods and services. Men with military training and experience gave their time as drillmasters. This and 50 or 60 other camps of instruction mainly taught walking to Texans brought up with the habit of moving about on horseback. (6 out of 10 Texans joined the Cavalry. Governor Clark felt compelled to say in his Executive Order that infantry service was actually a matter of honor.) Operated despite scorn of 18 to 35 year old recruits who had fought Indians most of their lives and were impatient for battle-- not for training. Though neither Texas nor the Confederacy in 1861 had funds for camps of instruction, by 1862 privates were paid $11 a month, officers $50. This Guadalupe County camp of instruction was convenient to roads and to water. Area units that trained here included Co. D, 4th Texas Infantry, of Hood's famous Texas Brigade, and 4th Texas Cavalry (Partisan) under Captain William P. Hardeman.
Andrew Butler Photos
Powered by ZENFOLIO User Agreement
Cancel
Continue