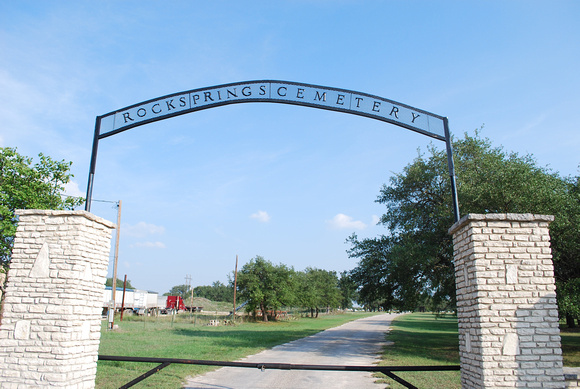 Historical Marker: The town of Rocksprings traces its beginnings to 1889, when J. R. Sweeten dug the first water well in the area to serve new settlers. Three years later, in 1892, Sweeten donated two acres of land to be used as a community cemetery. There were some burials at this site prior to its formal designation as a cemetery. Two children, Willie J. Blackwell and Ben Smith, were interred here in 1891. Many of the people buried in the Rocksprings Cemetery in the early years were travelers passing through the area. Among the more than one thousand graves are those of victims of a devastating tornado which struck the town of April 12, 1927. Over the years, additional land acquisitions have increased the size of the cemetery. Iron fencing which once surrounded some grave sites was donated to scrap metal drives during World War II. The Rocksprings Cemetery Association, which originated in 1897, was formally chartered by the state in 1967. Through such projects as surveys and landscaping, the association continues to maintain the historic graveyard, which remains as a visible link to the community's past.
Andrew Butler Photos
Powered by ZENFOLIO User Agreement
Cancel
Continue