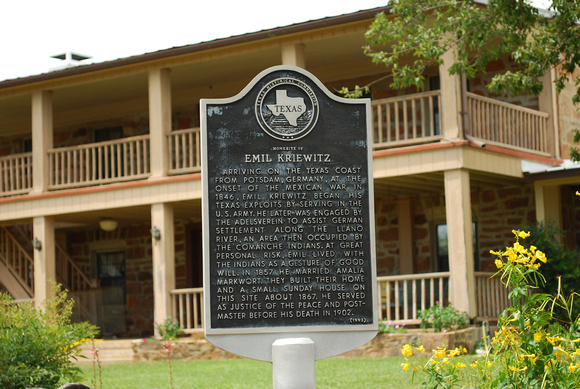 Text: Arriving on the Texas coast from Potsdam, Germany, at the onset of the Mexican war in 1846, Emil Kriewitz began his Texas exploits by serving in the U.S. Army. He later was engaged by the Adelsverein to assist German settlement along the Llano River, an area then occupied by the Comanche Indians. At great personal risk, Emil lived with the Indians as a gesture of good will. In 1857 he married Amalia Markwort. They built their home and a small Sunday house on this site about 1867. He served as justice of the peace and postmaster before his death in 1902.
Andrew Butler Photos
Powered by ZENFOLIO User Agreement
Cancel
Continue