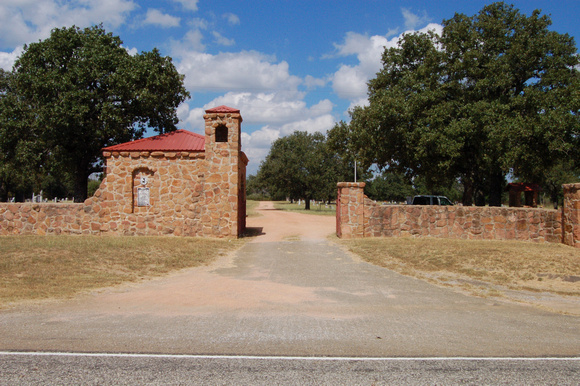 Text: This site was purchased in 1930 by the Emery, Peck and Rockwood Development Company and donated to the Bluffton Cemetery Association in anticipation of the company's construction of what would become Lake Buchanan. They provided the red sandstone for the cemetery's fence, portico and well structure. A number of local cemeteries were relocated here to make way for the dam. Stones that date from as early as the mid-1860s mark burials that were original to the Old Bluffton Cemetery, as well as the Chestnut, Holland, Maxwell, O'Donnell and Olney Cemeteries, and a few graves from below White Bluff. Some 59 burials were not identified, but all graves in the water's path were said to have been relocated in three stages in 1931, 1936 and 1937. One of the first interments here that was not a reburial took place upon the death of Isaac "Ike" Byler Maxwell (1837-1931), who had named the Bluffton Community back in 1854. As a state legislator, he influenced the choice to use native granite for the construction of the state capitol. In addition to varied roles in state and local public service, he was a Disciples of Christ minister. This site, cared for by an association since the 1930s, chronicles the rich heritage of the Bluffton area.
Andrew Butler Photos
Powered by ZENFOLIO User Agreement
Cancel
Continue