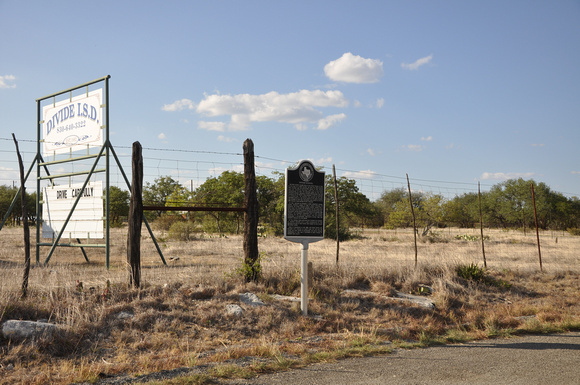 Text: The first school classes held in this vicinity began in 1882, in the home of a hired teacher. The only two area families with children paid the instructor's salary. In 1893, William and Lou Wharton provided land for a one-room schoolhouse to meet the growing needs of the local ranching families. Originally located approximately one mile southeast of the present Texas Highway 41 and U.S. Highway 83 intersection, the building was moved to the Emil Leinweber Ranch in 1905 to be closer to the area's school-age children at that time. The school year lasted as long as area families could afford to pay a teacher. In 1909, wanting to establish a more consistent school system, residents agreed to Fred B. Klein's proposal to establish the Divide Common School District. Named for a long ridge that divides the watersheds for the Llano River to the north and the Guadalupe River to the south and east, the district served families in a vast portion of western Kerr County. The dispersed community built a new school building on the Dee Hughs Ranch, and the district established a tax-supported, nine-month school year for students through the sixth grade. In 1936, several years after the state constructed Highway 41, district trustees built a new schoolhouse at this location on the F.B. Klein Ranch. They named the new facility the Divide School. From its beginnings in the 1880s, the Divide School has included vast acreage of ranch land, but has had no towns or cities within its boundaries. The district became independent in 1988, and it continues to serve families of western Kerr County.
Andrew Butler Photos
Powered by ZENFOLIO User Agreement
Cancel
Continue