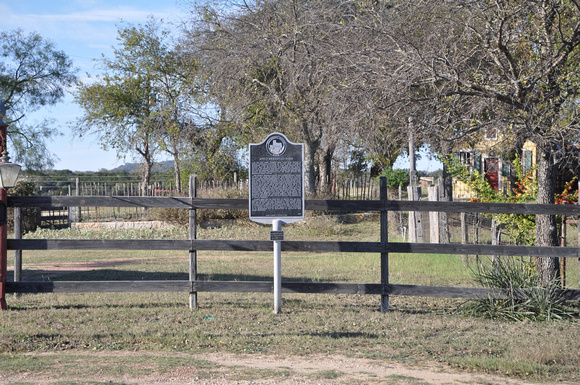 Text: In the late 1890s, Charles Apelt (1862-1944) opened a unique commercial enterprise at this site. Apelt a German immigrant, came to Comfort in 1887 and worked as a farmer. Here he encountered the armadillo, an animal natives to the Americas, and began to develop a commercial use for the mammal's hard shell. Utilizing the nine-banded variety (Dasypus Novemcintus), he soon opened the Armadillo basket factory. The novelty armadillo basket was a quick success; within its first six years of operation, the armadillo factory shipped 40,00 orders throughout the U.S. and the world. In 1904, Apelt displayed his product at St. Louis World's Fair and by the 1920s, the operation employed dozens of local hunters. At its height, the establishment produced about 100 baskets each week, which sold for $2.50 each or $15 if decorated with silk, bows and beads. Apelt found additional functions for armadillo shells, using them for floor and table desk sets and smoking stands. Some armadillos were captured live and sold to zoos, pet owners and research facilities; Apelt constructed an elaborate network of concrete burrows and tunnels in front of his home to meet the high demand for armadillos in medical research. Charles Apelt ran the farm until he died in 1944, his wife Martha, continued to run the business, which closed when she died in 1947. The farm reopened in 1951 before again closing in 1971. During its years of operation, the farm was a significant source of employment in the area. Although it is no longer in operation, Apelt Armadillo Farm continues to be remembered for its production of distinctive and famed souvenirs.
Andrew Butler Photos
Powered by ZENFOLIO User Agreement
Cancel
Continue