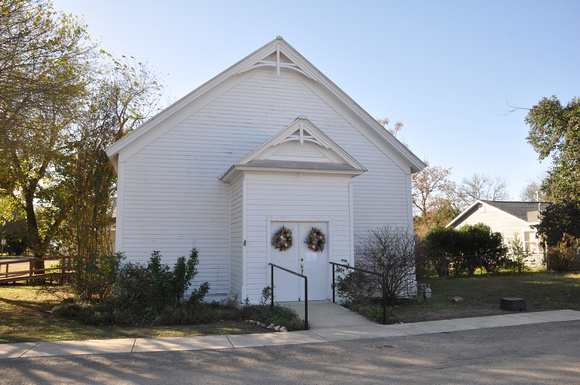 Center Point
Kerr County, Texas
29 56.544' N 99 02.109' W
Directions: Start at the intersection of Church Street and China Street. The church is on the northwest corner of the intersection.

Text: The Center Point Christian Church (Disciples of Christ) has been a part of the community and surrounding area for more than 135 years. The church was founded by traveling Kentucky Minister Green L. Surber in 1879. His parents, Adam and Jemima Surber, had moved to Center Point and both died here, giving a probable reason for Green to come. He also felt the need to preach and strengthen the faith of the growing community as part of a campaign to revive Texas spirituality. He preached, conducted weddings, and represented the area in the 1883 southwestern Christian Association in San Antonio. The first church building burned down in 1888 but was rebuilt at its present site in 1892. Funds came from the community and materials came from San Antonio and Kerrville. Many succeeding pastors served in both Center Point and Kerrville. In the 1920s, the congregation under Pastor Perry Hawkins joined several citizens to establish the Southwest Texas Christian Church encampment, also known as "Camp Christian." Situated on the Guadalupe River, the camp also leased out its facilities to camp young Judaea, a Jewish summer camp program, in the 1950s and 1960s, and to the Muscular Dystrophy Association in the 1970s. The property was sold in 1988. Since its establishment the church has had more than twenty pastors. The church has served as a place for the local congregation to meet and provide community outreach and revival meetings. As the town of Center Point has grown and changed, the church and its members have continued to serve their neighbors and their community.
Andrew Butler Photos
Powered by ZENFOLIO User Agreement
Cancel
Continue