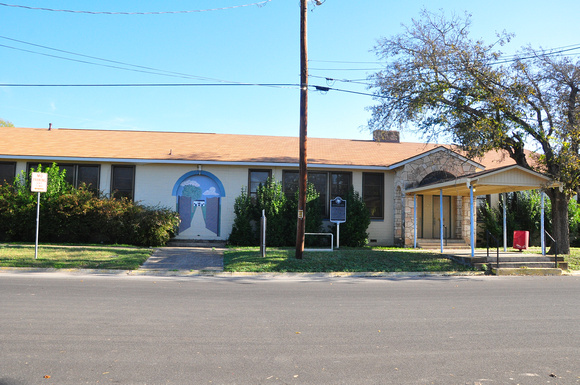 Kerrville
Kerr County, Texas
30 03.360' N 99 08.567' W
Directions: Start at the intersection of Barnett Street and Paschal Avenue. The building is on the northwest corner of the intersection.

Text: The Doyle School began as an African American school in 1909. The African American community raised $53 to move the frame building of the former school for white students after a new one was built. The land where the building was moved was donated by Anna W. Doyle, who was the head teacher for nearly two decades. the one-room schoolhouse had no utilities until running water was installed in 1920 and electric lights were installed in 1923. The black population in Kerrville was small and only 25 students from five north Kerrville families attended. The school expanded to include three classrooms, an auditorium, two bathrooms and a storage area. There was still no formal name for the school at the time. as enrollment grew to about 75 students in 1940, husband and wife B.T. and Itasco Wilson and Miss L.E. Cheeks were hired as teachers. B.T. (Prof) Wilson was revered in the community for his dedication to the students of Doyle. It was Wilson who decided that the school should be named after Anna W. Doyle. the school had high enough enrollment for athletic teams, cheerleaders, a choir and a marching band. Classes included sports, theater, music and home economics, alongside traditional academic subjects. integration of the Kerrville schools in 1964 reduced the school to a one-year program for elementary students. After one year, all African American students were integrated. In 1970, Doyle became a kindergarten campus under the direction of Starkey Elementary School principal, Fred H. Tally, and head teacher, Jean Tally. B.T. Wilson continued to positively influence students in his new position and the sixth grade school was eventually named for him. The Doyle School building was sold to a non-profit neighborhood association and remains open as a community center.
Andrew Butler Photos
Powered by ZENFOLIO User Agreement
Cancel
Continue