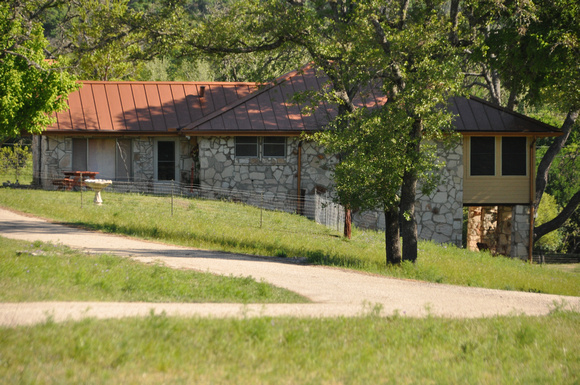 Text: Alabama native Guilford Marion Cade (1821-1887) was a doctor in the Confederate Army prior to his moving to Texas in 1865. He and his family moved to Kerr County in 1883 and purchased this property. Cade's son, Gilford P. Cade, bought the property from his siblings in 1901 and built a frame house after the family's log cabin was destroyed in a storm. As the family grew larger in the early 1930s, he and his son, Marion, built this stone house on a high hill facing east. The two-story house is composed of irregular coursed rubble masonry with a rear wing addition made of random coursed faced ashlar. Marion Cade used the random stones of his house as demonstration models for clients of his carpentry business. The second story landing is supported on large stone posts and rough-hewn beams.
Andrew Butler Photos
Powered by ZENFOLIO User Agreement
Cancel
Continue