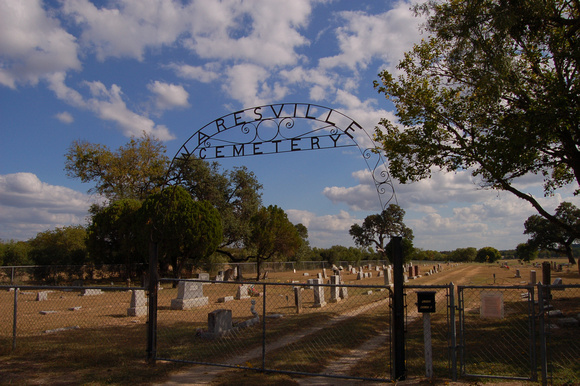 Historical Marker: The Waresville Cemetery is one of the last reminders of the Old Waresville Settlement on the Sabinal River established by Captain William Ware (1800-1853). Ware came to Texas in 1828 and first settled in Montgomery County. He fought for Texas independence at the Siege of Bexar and the Battle of San Jacinto. During his military service Captain Ware saw the Sabinal Canyon and decided to bring his family here to settle in 1852. Unfortunately, a few months after building a cabin, he became ill and died. His burial in March 1853 on his property was the beginning of the Waresville Cemetery. By 1880 the Waresville Community boasted a cotton gin, a gristmill, a sawmill, two flour mills, two churches, homes, and a school. In 1886 Waresville was renamed Utopia for its location and climate. Those interred here include members of the Ware Family and other early settlers; Henry Fuller, former slave of Captain Ware; victims of conflicts with local Indians; and descendants of early Waresville pioneers. The older part of the cemetery is still bounded by its original fieldstone fence. In 1951 the cemetery was surveyed and deeded to the Waresville Cemetery Association.
Andrew Butler Photos
Powered by ZENFOLIO User Agreement
Cancel
Continue