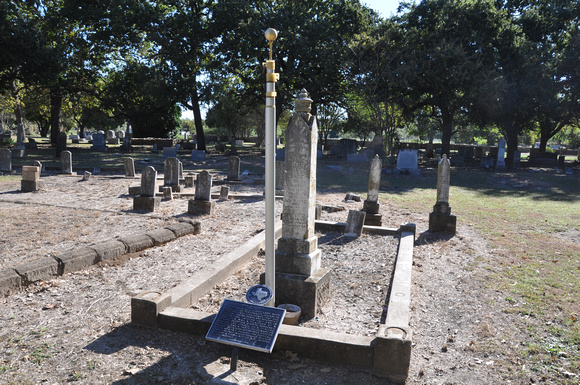 Hamilton
Hamilton County, Texas
31 42.591' N 98 07.222' W Directions: Start at the intersection of SH-218 and Francis Marion Road. The grave is in the Hamilton Cemetery which is located at the southern edge of a complex of cemeteries.

Text: (1839 - 1867) Described as a stout lady with an engaging personality, Elizabeth (Ann) Whitney confirmed that she could be strong, brave, and resourceful on one fateful July day in 1867. Ann was a teacher at a nearby frontier school. Suddenly, during the course of a typical school day, a party of Comanche Indians attacked. Reportedly pierced by 18 arrows during the ordeal, Ann Whitney nevertheless helped all but a young boy escape before dying herself.
Andrew Butler Photos
Powered by ZENFOLIO User Agreement
Cancel
Continue