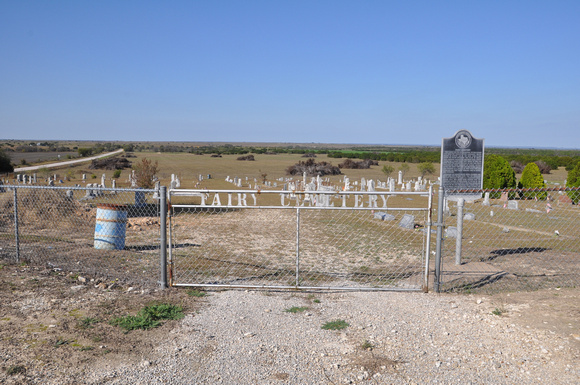 Text: First called Gap for its geographic setting between two hills, this sparsely settled community became known as Martin's Gap in the 1860s after a man named Jim Martin reportedly was killed by Indians while traveling through the area. When local citizens applied for a United States Post Office in 1884, the name Fairy was chosen in honor of Fairy Fort Phelps (1865-1938), the petite daughter of pioneer settlers Battle and Sallie Fort. Fairy and her father taught area children in a school in their home for many years, and the Fort family donated land to several area churches. Although the earliest known burial occurred here about 1880, deed records show that this graveyard was not officially set aside as a community burial ground until 1890. Among those interred here are numerous pioneer settlers, dozens of victims of the 1918 influenza epidemic, at least one Texas Ranger, and veterans of the Civil War, World War I, World War II, and the Korean War. Encompassing three sections, the cemetery contains many distinctive handmade gravestones and other types of grave markers. Maintained by a local association of descendants, the cemetery is a reflection of the area's pioneer heritage.
Andrew Butler Photos
Powered by ZENFOLIO User Agreement
Cancel
Continue