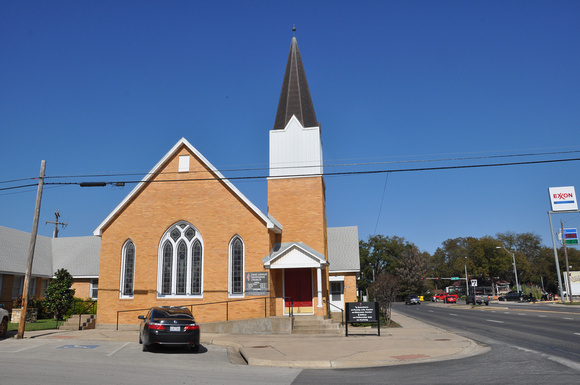 Text: In 1881, the Rev. John W. Hearn and Elder L.B. Hickman led 29 members in a newly organized Methodist church in Hico. The congregation held its early services in the Hico schoolhouse, and charter members included the L.T. Dillashaw, J.B. Hillyer, George D. Autrey and D.G. Barrow families. During a 10-day revival in winter 1884-85, evangelist R.R. Raymond helped raise money for a church sanctuary. Texas Central Railway donated land in 1886 for the use of the Methodist Episcopal Church, South, Congregation of Hico. A sanctuary was completed in spring 1887 at this site. The structure served the congregation, which had grown to more than 300 members, until 1902-03, when the current sanctuary was built of wood with handcrafted benches and pulpit. The church held an open house and homecoming in 1954, showing to former members and pastors a new education building and remodeled sanctuary, with an enclosed bell tower and new tan brick facade over the original wood cladding. The congregation's numbers grew during the 20th century as other area churches merged their memberships into Hico's. These churches represented the communities of Carlton, Clairette, Duffau, Fairy and Pleasant Hill. During its years as a congregation, the church has contributed to area communities through its many services, including Boy and Girl Scout programs, community dinners, and clothes and food pantry, as well as its youth, music and education programs, missionary funding, study and worship.
Andrew Butler Photos
Powered by ZENFOLIO User Agreement
Cancel
Continue