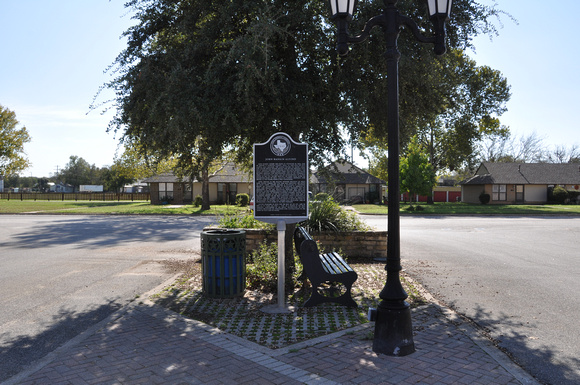 Hico
Hamilton County, Texas
31 58.840' N 98 01.860' W
Directions: Start at the intersection of Pecan Street and Railroad Street. The marker is on the north side of the intersection.

Text: John Rankin Alford was born in Tennessee in 1834, and he arrived in Hamilton County, Texas, in 1860 with his wife Martha Ann (Malone). The couple settled on Honey Creek and Alford began selling goods that he had brought with him by wagon and also engaged in the cattle business. The small settlement along Honey Creek was on the mail route between Meridian and Brownwood, and as the community grew, a petition was made for the establishment of a post office at the site; Alford selected the name Hico, after his childhood home of Hico, Calloway County, Kentucky, and served as the young town's first postmaster. After serving in the second frontier regiment of Texas State Troops during the Civil War and surviving the battle of Dove Creek, Alford became a physician by standing before an examining board of physicians in Meridian in 1875, and remained a doctor in good standing for the remainder of his life, practicing medicine well into his eighties. Alford married Lerona King in 1877 after the death of his first wife. He fathered fourteen children. Alford was a charter member of the Hico Masonic Lodge and was a founding member of the Hico Christian Church (Disciples of Christ). In 1880, when the railroad came to Hamilton County and the citizens of Hico chose to move the town to be adjacent to the rail line, Alford also relocated, and he established a drug store at the new townsite. Alford remained in Hico for the rest of his life, and he died in his home on April 1, 1928. He is buried in the Hico Cemetery, surrounded by his family and generations of Hico citizens who recognize his dedication and contributions to the town of Hico and its people.
Andrew Butler Photos
Powered by ZENFOLIO User Agreement
Cancel
Continue