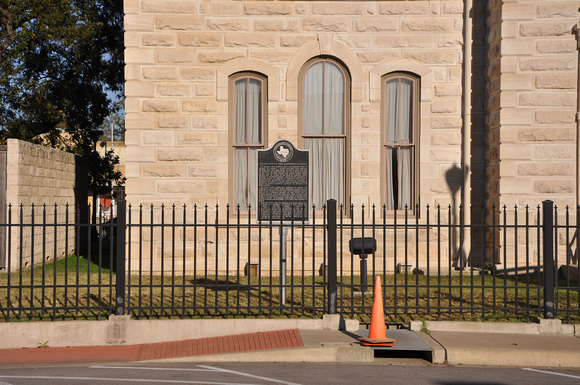 Gunfight at the Lampasas Saloon

Text: In the early 1870s Lampasas was a wild frontier town. In January 1873 Sheriff S.T. Denson was shot while arresting brothers Wash and Mark Short. The district judge sent men to apprehend the Short brothers, but the posse was stopped by Ben, Tom, and Mart Horrell and several others. Sheriff Denson and the justices of the peace of Lampasas County appealed to Governor Edmund J. Davis for the assistance of the State Police. On February 10, Governor Davis issued a proclamation prohibiting the carrying of sidearms in Lampasas. On March 14, Captain Thomas Williams and seven state policemen entered Lampasas to enforce the proclamation. The State Police immediately arrested Bill Bowen for carrying a gun in town. Bowen persuaded Captain Williams and two of his men to enter Jerry Scott's Lampasas Saloon, this led to a gunfight between the State Police and the Horrell brothers and their associates. Three officers were killed in the saloon and a fourth was fatally wounded while trying to escape. The police were buried in Lampasas, but Captain Williams was reinterred in the Texas State Cemetery in Austin. More State Police came to Lampasas and joined forces with the sheriff and Lampasas and Burnet County Minute Men companies to search for the Horrell Gang. They arrested four men connected with the incident. In early May the Horrell gang attacked the Georgetown Jail and released Mart Horrell and Jerry Scott form custody. The Horrell gang remained in the Lampasas area until September when they left for New Mexico. In 1874 they returned to Lampasas. In 1876 the Horrell brothers stood trial for the murder of the State Police, but were found not guilty.
Andrew Butler Photos
Powered by ZENFOLIO User Agreement
Cancel
Continue