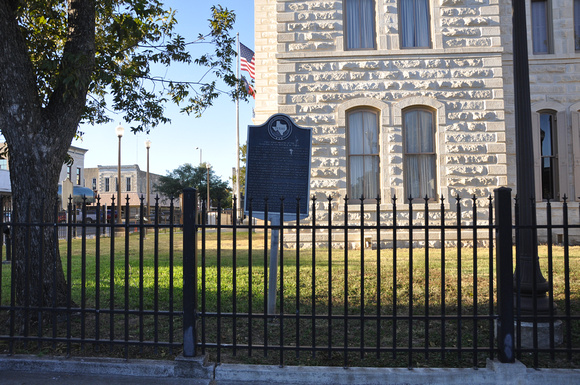 First State Meeting of the Daughters of the Republic of Texas

Text: On April 20, 1892, thirteen members of the Daughters of the Lone Star Republic met in joint session with the Texas Veterans Association in Lampasas. Having been organized the previous November in Houston, the Daughters had been at work in the interim preparing a constitution and by-laws. Guy M. Bryan, vice president of the Texas Veterans Association, presided at the 1892 annual convention in the Lampasas County Courthouse. Mrs. Willie Ashe of Houston, representing her grandmother, Mrs. Anson Jones, President of the Daughters, addressed the gathering and eloquently stated the goals and objectives of the new organization. Following the adjournment of the Texas Veterans' meeting on April 21, the Daughters of the Lone Star Republic reconvened at the Lampasas Methodist Church (2 blocks east). With Mrs. Anson Jones presiding, the members changed the name of the association to the Daughters of the Republic of Texas and adopted a constitution. The first state meeting of the DRT solidified the members' desire to organize and inaugurated a Texas institution dedicated to the preservation of the heritage of the Republic era.
Andrew Butler Photos
Powered by ZENFOLIO User Agreement
Cancel
Continue