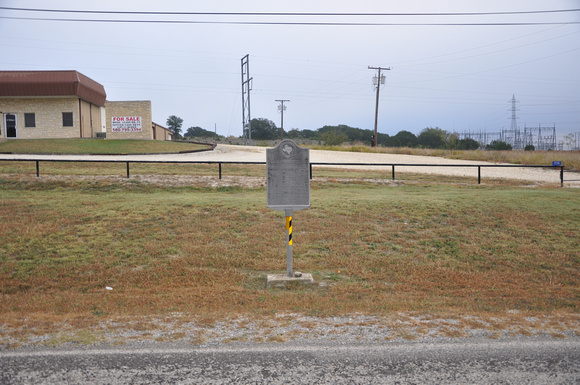 Text: Centenary College Preparatory School, Lampasas' first coeducational college, was founded 1883 by the local Methodist Episcopal Church, on the centennial of the organization of Methodism in the United States. First president was The Rev. Marshall McIlhaney, at a salary of $125 per month. Two 3-story buildings comprised the plant. First-year enrollment was 174 and tuition was $25 per 5-month semester; Christmas break lasted 1-1/2 days. In 1894 the property was sold and classes moved to the vacant Park Hotel; when the hotel burned a year later, the college closed. St. Dominic's Villa, a Catholic boarding academy for girls of all faiths, opened in 1900 in the former Centenary College buildings. Under the able, spirited direction of the Dominican Sisters, it made progress for two decades. Its former students recalled their villa days as ones of "girlhood happiness". Sister Mary Catherine, director, and her dedicated staff developed an atmosphere of home-like contentment and high scholastic standards. The college had two 5-month semesters; to gain school days, Easter vacation was not observed. Peak enrollment of 70 was reached in the second year. Anti-Catholic activity of the "Ku Klux Klan" helped influence the villa to close.
Andrew Butler Photos
Powered by ZENFOLIO User Agreement
Cancel
Continue