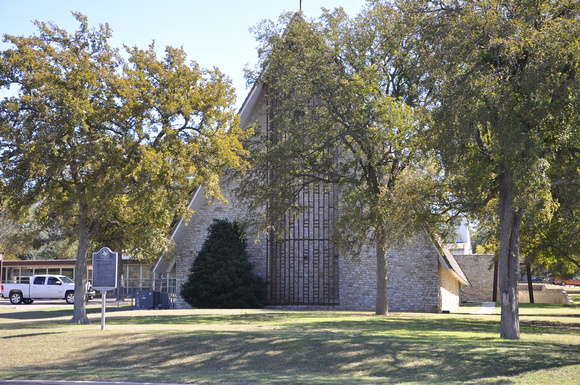 Text: Methodists in Lampasas were holding church services as early as 1866. The Rev. William F. Cummins is the first known pastor to have served the Methodist circuit in this area. Although the exact details of the organization of the First United Methodist Church of Lampasas are unclear, it is known that a sanctuary was built on Fourth Street in 1880, during the pastorate of The Rev. E. F. Kahle. Four years later, the congregation sponsored the opening of Centenary College. The Christian Boarding and Preparatory School was located in Lampasas and was in operation for about ten years. In 1900, under the leadership of The Rev. J. S. Braswell, the fellowship moved to a new church home on Key Avenue. The congregation relocated to Highway 190 East and Alexander Drive (1 mi. N) in 1966. Mergers with the Black Methodist congregation known as Alice Chapel and a rural Methodist church at Ogles have strengthened the membership. With ties to the Reconstruction Era in Texas history, the First United Methodist Church of Lampasas has played a long and distinguished role in the leadership of this community. Descendants of some of the earliest known members still worship with the congregation.
Andrew Butler Photos
Powered by ZENFOLIO User Agreement
Cancel
Continue