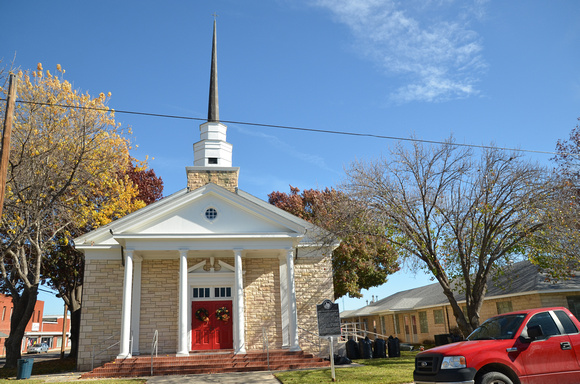 Text: The First Presbyterian Church in Lampasas originated from Presbyterian missionaries in 1877. The congregation was officially organized on October 28, 1881, with seven members. On September 29, 1882, the Presbyterian Church called its first pastor, Reverend John Giffen and erected a worship building. Over the years, several pastors would serve the church and community, including Reverend E.C. Leeper who helped the congregation gain state recognition as religious institution and guided their growth in 1907 and 1908. In 1915, Reverend J.M. Brooks oversaw the construction of a new sanctuary on Chestnut and Third Streets. A parsonage, fellowship hall and Sunday school building were added in 1954. The congregation became the beneficiary of the Ida and Pauline Senterfitt Estate, and with this support a new sanctuary was built in 1959 to replace the 1916 building. The congregation grew and extended its missionary outreach around Texas, and other states and foreign countries. The congregation has always supported missions of mercy and ministries that nurture the faith of the congregation, and has assisted in the development of new churches. The Centennial Celebration in 1981 included publishing the history of the church. The congregation continues to serve the community of Lampasas through ministry and outreach.
Andrew Butler Photos
Powered by ZENFOLIO User Agreement
Cancel
Continue