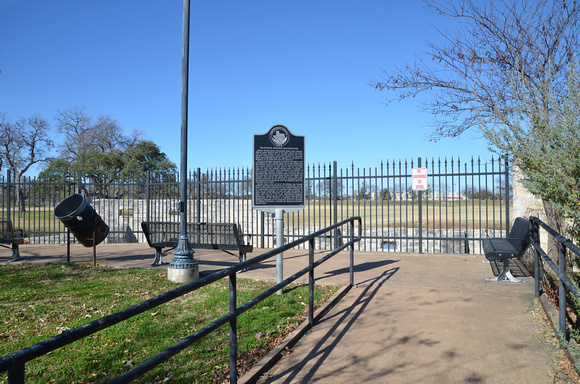 Text: Pioneer settlers began establishing homes near Lampasas Springs and Sulphur Creek in the 1850s. During the middle 19th century, stories of the mineral springs and their curative powers began attracting tourists to Lampasas, which was sometimes called the “Saratoga of the South,” in reference to the famed New York spa community. The Gulf, Colorado and Santa Fe Railroad extended its line to Lampasas in 1882, making travel to the area easier, and with the rail came capital investors who quickly built hotels and tourist facilities. In 1882, land at this site was sold from the John and George Hancock family to George L. Porter of Harris County who transferred the property to the Lampasas Springs Company. The company built a bathhouse here, creating changing rooms, facilities for hot and cold baths, and bathing pools for men and women. The company also erected the Grand Park Hotel, which was located northwest of the bathhouse. A mule-drawn streetcar connected the bathhouse with the passenger depot on the other side of town. Sulphur Creek, which is fed by the springs, has flooded several times since construction of the bathhouse, and the roof of the facility was gone by 1920, possibly carried away by floodwaters. However, the limestone walls remained. In 1936, the city purchased the land and used the springs to supply water to the community. The turquoise waters of the pool, now part of a city park, demonstrate Lampasas’ history as a tourist destination. The springs were once the foundation of the economy in Lampasas and are now historical treasures of the community. The city, in an effort to preserve this history, stabilized the remaining bathhouse walls in 2003.
Andrew Butler Photos
Powered by ZENFOLIO User Agreement
Cancel
Continue