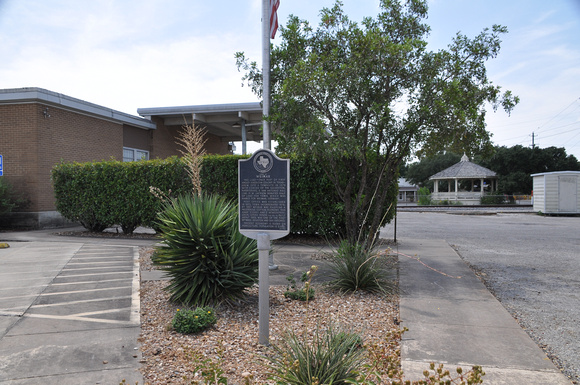 Weimar
Colorado County, Texas
29 42.153' N 96 46.838' W
Directions: Start at the intersection of Center Street and Main Street. The marker is on the southeast corner of the marker.

Text: This land once part of first Anglo-American colony in Texas grew into a townsite in 1873 with coming of the Galveston, Harrisburg, & San Antonio rail line. D.W. Jackson donated half of land for town, which was named for Weimar, Germany. Post Office was established in 1873. Town incorporated 1875. By 1887 Weimar was enjoying a prosperous cotton economy, had many stores and 2 newspapers. Local opera house (150 yds. s), built about 1880, was one of the first between Houston and San Antonio. Present Economy is based on agriculture. Population is 2,050.
Andrew Butler Photos
Powered by ZENFOLIO User Agreement
Cancel
Continue