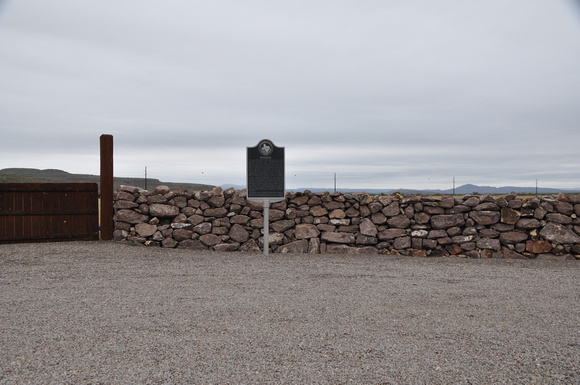 Text: The earliest large-scale cattleman to settle in the Big Bend, Milton (Don Meliton) Faver prospered against seemingly impossible odds to become the first cattle baron west of the Pecos. While operating a freighting business on the Chihuahua Trail, he moved his family to Presidio del Norte and opened a general store about 1855 . After accumulating a large herd of cattle in Mexico he moved his family and vaqueros to the mountain country north of Presidio and made his headquarters on Cibolo Creek in 1857. He established two other ranches at nearby La Cienega and La Morita. Springs flowed abundantly on all three ranches, providing water for livestock and agriculture. In the fertile fields surrounding the ranches, Faver devised and installed irrigation systems that supplied water for vegetables, grain, and large peach orchards. El Fortin del Cibolo, ranch headquarters, served as a supply station for the U. S. Army quartermaster division at Ft. Davis. Troops used the ranch as a point of departure for forays into Indian occupied regions to the west and north. Celebrated for his hospitality, Faver was known as a gentleman of means who lived in style. He died in December 1889 and was buried on his ranch at Cibolo.
Andrew Butler Photos
Powered by ZENFOLIO User Agreement
Cancel
Continue