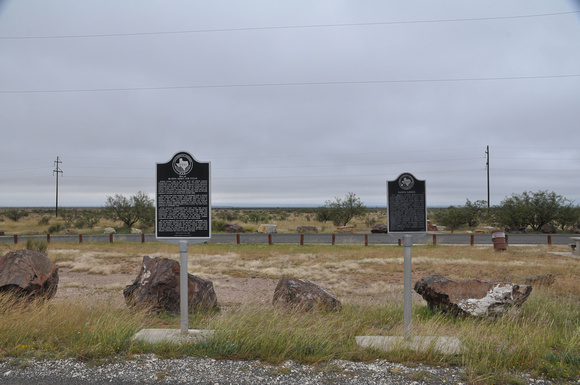 Text: During World War II, the U.S. Army Air Forces (USAAF) established a significant number of training airfields across the state of Texas. The USAAF Western Flying Training Command selected Marfa as the site for an advanced multi-engine flying school in 1942. Due to an initial lack of supplies and properly trained personnel, the USAAF struggled at first to establish the command effectively and to provide adequate housing for those who served here. The airfield had four hangars, five runways and a unique angled parking apron. There were also several auxiliary fields in the area. Support personnel here included a Women's Army Corps unit established in 1943 and African American troops, assigned primarily to motor pool duties. Trainees included allied Chinese flying cadets, the first class arriving in September 1944. After Germany surrendered in May 1945, the USAAF considered deactivating Marfa Army Air Field and placed the installation on standby status. However, the need for additional transport aircraft in the Pacific campaign temporarily extended the mission of the airfield. In June 1945, the USAAF placed the airfield in the Troop Carrier Command as home of the 818th Army Air Forces Base. The USAAF formally deactivated the base in September 1945, and the gradual exodus of the military had a devastating impact on Marfa. The military sold off buildings, many later used for civilian purposes in Marfa, Alpine and other locales. Today, all that remains of the once impressive site are foundations, runways and the memories of those who proudly supported the airfield during the war.
Andrew Butler Photos
Powered by ZENFOLIO User Agreement
Cancel
Continue