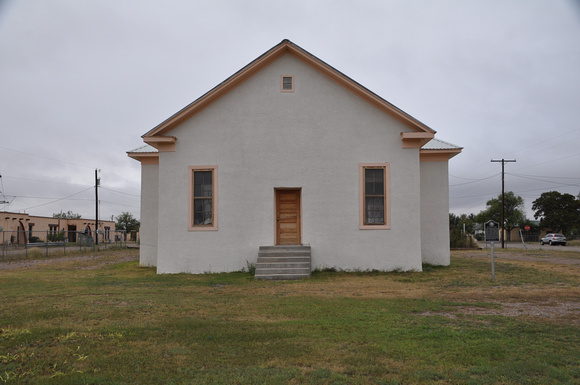 Marfa
Presidio County, Texas
30 18.360' N 104 01.326' W
Directions: Start at the intersection of Abbot Street and Waco Street. The marker is on the southwest corner of the intersection.

Text: Education for local children of Mexican descent dates from 1889, when the former Methodist Church became a schoolhouse. The school, named for longtime principal Jesse Blackwell, served hundreds of Hispanic children up to ninth grade. Students were told to speak only English on campus; Spanish words written on slips of paper were buried on the grounds in a mock funeral ceremony. The school closed in 1965 with integration of Marfa schools. The building sat vacant until preservation efforts by the Blackwell School Alliance, formed in 2006. The one-story schoolhouse has a modified hip roof, front-gabled entry, and plastered 24-inch thick adobe walls on a stone foundation.
Andrew Butler Photos
Powered by ZENFOLIO User Agreement
Cancel
Continue