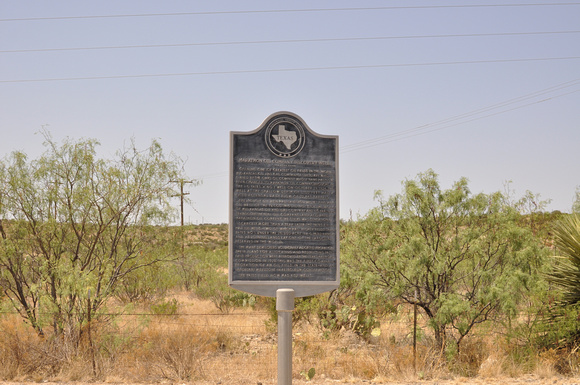 Text: Opening one of greatest oil fields in the world, Mid-Kansas Oil and Gas Company (a subsidiary wholly owned by the Ohio Oil Company, whose name has now been changed to Marathon Oil Company) brought in the I. G. Yates "A" No. 1 well on October 29, 1926. The well at the shallow depth of 1,150 feet had a rated potential daily flow of 72,869 barrels. Previously oil men had said: "You won't find any oil west of the Pecos." This did not stop the work of Mid-Kansas Oil and Gas Company and its partner, Transcontinental Oil Company, later acquired by Marathon Oil Company. The strike was sensational. Scarcely more than a year later, the Yates field had 100 wells--two of which had higher yields than Yates No. 1. Under the 20,000-acres Ira G. Yates ranch and adjoining lands lay one of the largest oil reserves in the world. The many developers voluntarily adopted proration. Their plans for allocating and restricting Yates fields production were approved by the Texas Railroad Commission in 1928. This was the first complete commission in 1928. This was the first complete proration of an oil field in the state --and an important milestone in petroleum conservation. The Yates field now has 607 wells.
Andrew Butler Photos
Powered by ZENFOLIO User Agreement
Cancel
Continue