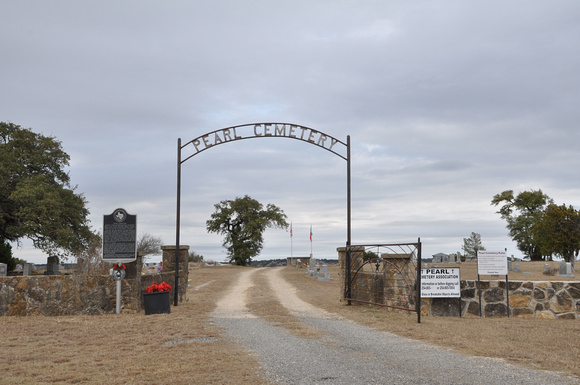 Historical Marker: Originally named for Swayback Mountain, the community served by this cemetery was named Wayback through a clerical error in 1884. The name was changed to Pearl in 1890 for the young cousin of postmaster E. P. Davenport. In the early 1890s, Pearl residents were often buried in the nearby Hope, Bee House, and King Cemeteries. The earliest known burial in Pearl was that of Lottie May Manning who was interred in the Methodist Churchyard in the spring of 1893. The first known burial in Pearl Cemetery was that of fourteen-year-old Lillian Keeton in June 1896. Lillian's relatives J. H. and Emily Keeton gave the land on which she was buried. They created a community cemetery by setting aside five acres of property as burial plots and deeded 4.1 acres of that land to the school district to be used for public burials. Burials of interest include several victims of the influenza epidemic of 1918, including Dr. H. W. Lingswallow who contracted the disease while treating his stricken patients. Three Civil War veterans, as well as veterans of World War I and World War II are interred here. World War I veteran Dr. F. B. King, born in North Carolina, was the grandson of Eleanor Houston King, a relative of General Sam Houston. Veterans of the Korean and the Vietnam wars are also interred here. The Pearl Cemetery Association was formed in 1972. The cemetery continues to serve the community as a chronicle of pioneers and military veterans of Coryell County.
Andrew Butler Photos
Powered by ZENFOLIO User Agreement
Cancel
Continue