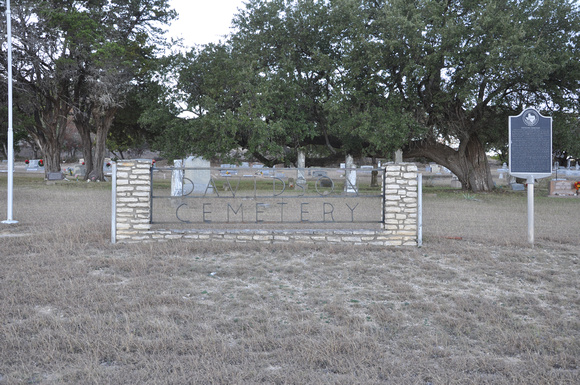 Historical Marker: James Madison (Matt) Davidson (1826-1925) came to Texas from Tennessee in 1852 and settled in Milam territory. In 1854 Matt Davidson and Vianna Moore (1832-1912) were the second couple issued a marriage license in Coryell County, formerly Milam territory. After serving in the Confederate Army during the Civil War, Davidson bought land on Coryell Creek and built a log cabin there for his family. Land overlooking the Davidson homestead became the community cemetery. The earliest marked grave is that of S. R. Bailey in 1862. Many burials, including several for small children, took place before the graveyard location was described in a land survey in the 1890's. The community that grew around the cemetery included the Blackfoot and Davidson Schools, the Pecan Grove Post Office, businesses, churches and homes. The graveyard was also called the Blackfoot Cemetery. Among the more than 600 graves are those of veterans of wars from the Civil War through the Vietnam War. The Davidson Cemetery Association was established in 1985 to maintain the grounds. Two acres of land donated in 1988 by a Davidson descendant were added to the original six-acre graveyard. The cemetery continues to serve the area.
Andrew Butler Photos
Powered by ZENFOLIO User Agreement
Cancel
Continue