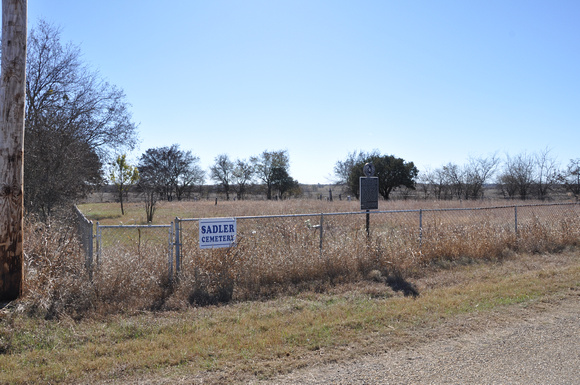 Historical Markers: Settlers, including many from Tennessee, arrived in the area around Rainey's Creek in the early 1850s. The community became known as Rainey's Creek until 1871, when the post office changed its name to Coryell City. By that time, the community cemetery had been established on land set aside in the 1850s by Chester Calhoun Sadler (d. 1911) for his family, friends and neighbors. Sadler, a farmer, freighter, confederate veteran and community leader, came to Texas from Tennessee with his wife, Delia Douglas Cowan Sadler, and their children. Ira Bradford Sadler, Delia's son from a previous marriage, was a Confederate soldier and a prisoner of war; he later became a lawyer and served in the Texas Legislature. These individuals and several other Civil War veterans are buried here among the graves of their families and other pioneers. As Coryell City grew, area residents began using church graveyards. The last burial in Sadler Cemetery was in 1940. Today, the site is maintained by Sadler descendants and community members.
Andrew Butler Photos
Powered by ZENFOLIO User Agreement
Cancel
Continue