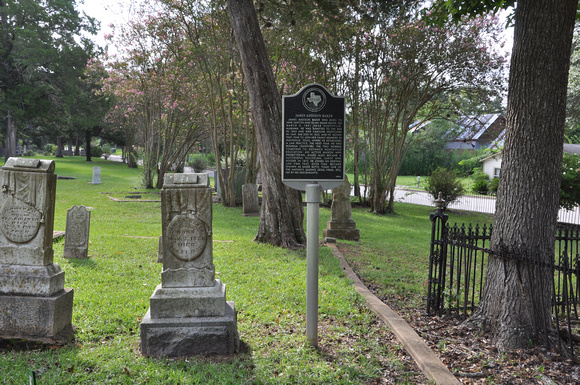 Huntsville
Walker County, Texas
30 43.595' N 95 32.800' W
Directions: Start at the intersection of 9th Street and Avenue I. The Oakwood Cemetery is on the northeast corner of the intersection. The marker is in the cemetery. 1

Text: James Addison Baker was born to Jane Saxton and Elijah Adam Baker on March 3, 1821 near Huntsville, Alabama. He was admitted to the Bar in 1843 and wed Caroline Hightower in 1849. She died in 1852, and he moved that year to join her family members in Huntsville, Texas, where he established a law practice. The next year, he wed Rowena Crawford. The two worked together to advance Huntsville education. An active Mason and Presbyterian, Baker also became a successful politician, jurist and soldier. In 1872, he joined an existing law firm that, over time, became known as Baker Botts, today one of the Nation's leading legal firms, still led by his descendants.
Andrew Butler Photos
Powered by ZENFOLIO User Agreement
Cancel
Continue