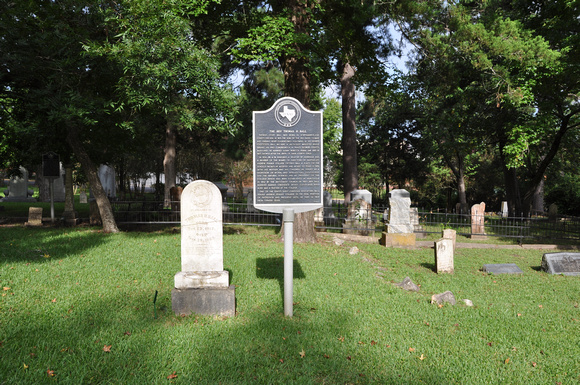 Huntsville
Walker County, Texas
30 43.595' N 95 32.800'
W Directions: Start at the intersection of 9th Street and Avenue I. The Oakwood Cemetery is on the northeast corner of the intersection. The marker is in the cemetery.

Text: Thomas Henry Ball was born in Northumberland County, Virginia, in 1819, the son of The Rev. David Thomas and Hannah Henry (Gaskins) Ball. Following in his father's footsteps, Ball became a Methodist minister. While serving his first congregation in Prince Georges County, Maryland, he married Susan Rebecca Perrie. She died in 1853, shortly after the birth of their fourth child. In 1854, Dr. A. W. Rawlings, a relative by marriage and a member of the Board of Directors of Huntsville's Andrew Female College, offered Ball a place on the school's faculty. He accepted and moved to Texas in 1855 with his mother and his children. He served as a professor of Moral and Intellectual Philosophy and the Natural Sciences and as president of the college, which had been established in Huntsville in 1852 by the Methodist Church. In 1857, Rev. Ball married Mariah Obedience Spivey Cleveland, who also was a teacher at the college. One of the state's early Christian educators, Ball served Andrew Female College in the dual position of professor and president until he died in 1858 from typhoid fever.
Andrew Butler Photos
Powered by ZENFOLIO User Agreement
Cancel
Continue