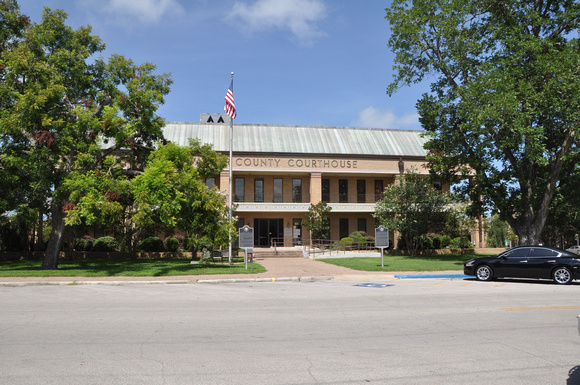 Huntsville
Walker County, Texas
30 43.398' N 95 33.041' W
Directions: Start at the intersection of University Avenue and 11th Street. Go 1/2 block south on University Avenue. The marker is on the right (west) side of the street.

Text: The first Walker County Courthouse was available for county commissioners court meetings in July 1848; the building was finally completed in the center of the Huntsville public square in 1850. Because of a defective foundation, a second courthouse had replaced it by 1853. Repairs made in 1856 did not hold long. The design for the third county courthouse featured a grand jury house in the southwest corner of the grounds rather than inside the courthouse itself. Dubbed "The Little Courthouse," the grand jury house was completed and in use by 1861. Construction on the main courthouse was interrupted by the Civil War; it was finished in 1869 but major repairs were necessary within a couple of years. On the first day of 1888 the grand jury house was again called into service after the main courthouse burned. The commissioners court selected Eugene T. Heiner of Houston to design a new building. The construction contract was awarded to . N. Darling of Palestine. Darling set to work in late spring and erected Heiner's vision, replete with Victorian Gothic, Renaissance revival and Italianate details. That structure, the fourth Walker County Courthouse, gradually welcomed back the social and religious groups of the county. Other uses included the Walker County Fair of 1912 and a lecture series sponsored by Texas A & M University in 1914. The interior of the building burned in 1968. At that time, it was one of the 25 oldest courthouses in the state of Texas. The fifth Walker County Courthouse, a modern brick and steel structure, was completed in 1970. It remained in service at the dawn of the 21st century.
Andrew Butler Photos
Powered by ZENFOLIO User Agreement
Cancel
Continue