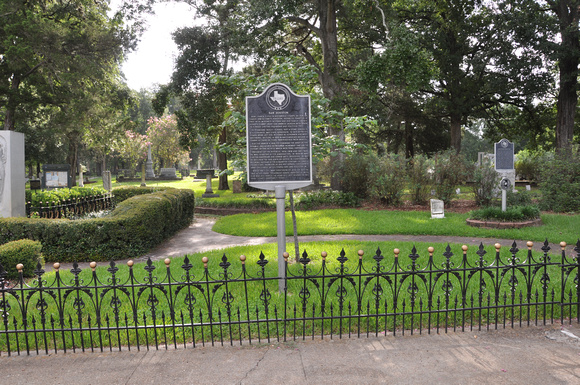 Huntsville
Walker County, Texas
30 43.595' N 95 32.800' W
Directions: Start at the intersection of 9th Street and Avenue I. The marker is on the northeast corner of the intersection in the Oakwood Cemetery.

Text: Born March 2, 1793, in Rockbridge County, Va.; son of Samuel and Elizabeth Houston. Moved to Tennessee in 1807 with widowed mother and her family. In 1813 joined U.S. Army under Gen. Andrew Jackson, with whom he formed lifetime friendship and political ties. In Tennessee, taught school, kept a store, served in U.S. Congress, was state governor. In 1829, after his young bride left him, resigned as governor and went westward. Settling in 1833 in Nacogdoches, became a leader in cause of Texas independence from Mexico. Elected March 4, 1836, to command the Army of the Republic, engineered retrograde movement that led to victory of San Jacinto, which won Texas independence. President of the Republic, 1836-1838 and 1841-1844, he was senator after annexation. In 1859 he was elected governor, and served until secession. In 1861 he declined to take oath of office in Confederacy, retiring instead after a quarter-century of service to his state. However, he did not oppose Confederate army enlistment of his young son, Sam Houston, Jr. While the Civil War continued, he died on July 26, 1863, at his home, "Steamboat House," Huntsville. With him was his family, to hear his last words to his wife: "Texas--, Margaret, Texas--".
Andrew Butler Photos
Powered by ZENFOLIO User Agreement
Cancel
Continue