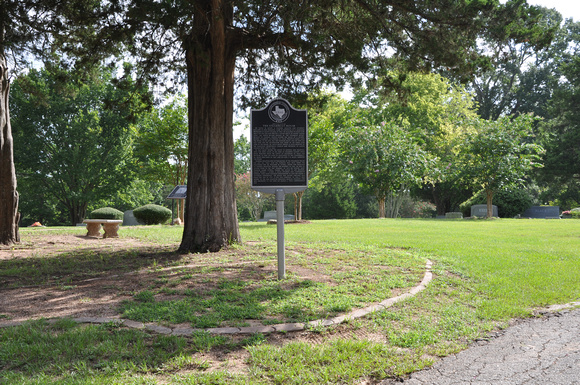 Original Site of The Steamboat House

Huntsville
Walker County, Texas
30 43.602' N 95 32.565' W
Directions: Start at the intersection of 9th Street and Martin Luther Kind Drive. The Oakwood Cemetery - Adickes Addition is on the northeast corner of the intersection. The marker is in the cemetery.

Text: Dr. Rufus W. Bailey, a teacher, minister and attorney educated in New England, came to Huntsville as a language professor at Austin College in 1855. He acquired an eight-acre tract on this site and erected a house which he named "Buena Vista," but which became known as "The Steamboat House" because its unusual design evoked the image of a double-decker steamboat. According to local tradition Bailey gave the house to his son, but the younger Bailey and his wife did not care for the architecture and none of the family ever lived in the house. Dr. Rufus Bailey served as both minister of the Huntsville Presbyterian Church and president of Austin College from 1858 to 1862. In 1862 Bailey rented the house to General Sam Houston, who had been living at his farm in Chambers County since being removed from the Office of Governor of Texas for refusing to take an oath of allegiance to the Confederacy. Dr. Bailey died early in 1863, and his son, F. B. Bailey, inherited the house. General Houston died of pneumonia at the Steamboat House on July 26, 1863, and his funeral was held there the following day. Dr. Pleasant W. Kittrell, friend and physician to General Houston, bought the property in 1866. He died of yellow fever in the 1867 epidemic. In 1873 his widow, Mary Frances Goree Kittrell, traded the house to her brother, Major Thomas J. Goree, a local attorney and Confederate veteran, who made extensive renovations to give the house a Victorian appearance. The house was moved one-half mile from this site in 1927; it fell into disrepair. In 1936 it was moved to the Sam Houston Memorial Museum grounds and was presented to the state on March 2, Texas Independence Day.
Andrew Butler Photos
Powered by ZENFOLIO User Agreement
Cancel
Continue