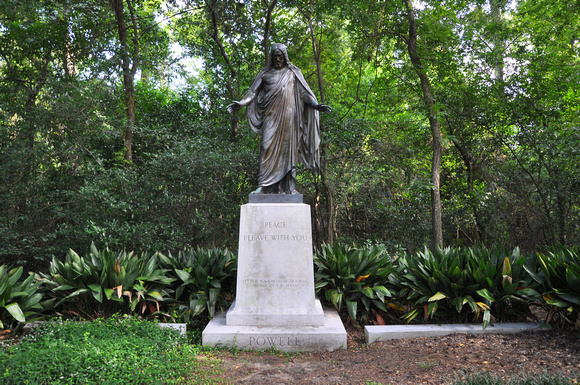 Text: Benjamin Harrison Powell (1881-1960) was a successful lawyer in the area for fifteen years until he was appointed in 1918 by Governor Hobby as Judge of the 12th District Court and subsequently to the Commission of Appeals in Austin. Marian (Rather) Powell (1881-1974) taught at Huntsville High School and Sam Houston Normal Institute, as a Huntsville School Board member, and the Walker County Women Suffrage Chairperson. Follow the death of their five-year-old son Rawley Rather Powell (B. 1918) in 1923 Benjamin and Marian wanted to create a place that could help others in times of grief. The Powells purchased 1.86 acres of forested land adjoining Powell Family Cemetery tracts at Oakwood in 1925 and the walkway, pubic gathering place and driveway rights for access and gatherings from the Cemetery in 1937, with an additional two acres in 1939. This sanctuary features one of the few full-sized American copies of "The Christus," a world-renowned piece of art by Danish sculptor Bertel Thorvaldsen. The statue of Christ was created from bronze with Southern Georgian granite used for the pedestal on which Christ stands. Granite benches were installed for visitors to meditate and read the Sidney Lanier poem "The Trees and the Master." As Dr. Harry F. Estil wrote on October 10, 1934, the Christ figure "is a benediction to the citizens of Huntsville and to strangers who in the years to come will gaze upon it, and whoo will be inspired -- as was I -- by the overwhelming felling of reverence and of worship." Place within Huntsvile's Oakwood Cemetery, Powell Sanctuary has offered solace to those seeking comfort since 1934.
Andrew Butler Photos
Powered by ZENFOLIO User Agreement
Cancel
Continue